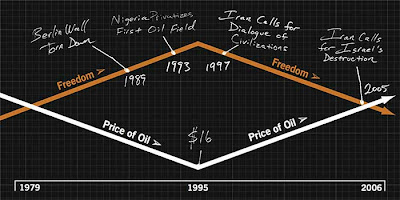 The results of oil dependency and global expansion are becoming part of our new reality - oil prices hovering near $100 a barrel, without anyone expecting them to go down much. Some of us think they'll just keep on going up. Looking back on $20 a barrel already seems nostalgic.
And in tandem are the ever more frightening realities of global warming, or as I recently heard it described, climate chaos. The third scary result of high oil prices is international petropolitics, where profits flow into countries with truly wacky leaders. (I have to say the same wacky leader description could be said for the USA even though we don't have oil fields.)
These factors give us three serious motivations to conserve energy and increase our energy efficiency, thereby decreasing our fossil-fuel dependency & eco-footprint:
1. Price/Pocketbook. Even though it costs money to upgrade efficiency by replacing appliances, it pays off. Conserving on energy is free, of course, but living a lower energy consumption lifestyle is more comfortable if you invest in insulation, sweaters, new windows, and the like. Energy prices will only increase, so figuring out all the ways you can conserve and/or increase your efficiency will be investments, not just expenditures.
2. Planet. If you're not motivated by price, perhaps you're motivated by global warming. Increasing your energy consumption is a major way to decrease your global footprint which is in large part defined by fossil fuel consumption.
3. PetroPolitics. If you're not moved by the first two motivators, think about the consequences of the billions of dollars flowing into Venezuela, Saudi Arabia, Iran, and Sudan/Darfur, and how the world is completely dependent on these oil-powers. Saudi Arabia does not allow women to drive, and canes and jails a woman who is seen in public with an unrelated man, even if she is a rape victim. Iran is a Holocaust-denying petrocracy. Venezuela sells gas for $.07 a gallon to keep its people happy - think of the waste and emissions that generates! Sudan perpetrates genocide on its Darfuri citizens and China, its chief oil customer, does not protest. We Americans have already spent almost 1 trillion dollars - $1,000,000,000,000.00 - on the war in Iraq, fundamentally an oil war. Unless we can rebalance the power of oil by decreasing our fossil fuel consumption habits, these wars will not end. We'll be talking Oil War I (probably Iraq), Oil War II, and on and on.
So buy yourself some warm clothes, turn down that thermostat, use mass transit, and write your legislators to pass the Warner/Lieberman bill!

Posted by Betsy Teutsch at 8:50 PM

I have a blog containing good information on global warming. Ozone has doubled since the mid-19th century due to chemical emissions from vehicles, industrial processes and the burning of forests, the British climate researchers wrote. Carbon dioxide has also risen over that period. History of global warming is very deep since 1850.