My Hero on My Heroes 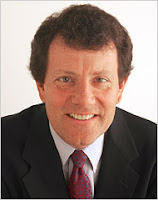 The mantra of social entrepreneurship is "do well by doing good", and I am just blown away by what serious people are accomplishing, often financing the socially beneficial start-up themselves and using profits to spread the benefits. My blog highlights the wise and creative use of money, and I can't think of a better example. Nicholas Kristof - my personal hero because of what he has done to publicize the genocidal atrocities in Darfur through his NYTimes columns - has written about social entrepreneurship today in the New York Times . I am printing it below in its entirety since it's hard to get on the NYTimes op-ed page without a subscription.

The World Economic Forum here in Davos is the kind of place where if you let yourself get distracted while walking by a European prime minister on your left, you could end up tripping over a famous gazillionaire — and then spilling your coffee onto the king on your right. But perhaps the most remarkable people to attend aren’t the world leaders or other bigwigs.

Rather, they are the social entrepreneurs. Davos, which has always been uncanny in peeking just ahead of the curve to reflect the zeitgeist of the moment, swarmed with them.

So what’s a social entrepreneur? Let me give a few examples among those at the forum in Davos.

• In Africa, where children die of diarrhea from bad sanitation, Isaac Durojaiye runs a franchise system for public toilets. He supplies mobile toilets to slum areas, where unemployed young people charge a small fee for their use. The operators keep 60 percent of the income and pass the rest back to Mr. Durojaiye’s company, Dignified Mobile Toilets, which uses the money to buy new toilets.

• Nic Frances runs a group that aims to cut carbon emissions in 70 percent of Australian households over 10 years. His group, Easy Being Green, gives out low-energy light bulbs and low-flow shower heads — after the household signs over the rights to the carbon emissions the equipment will save. The group then sells those carbon credits to industry to finance its activities, and it is now aiming to expand globally.

• In the U.S., Gillian Caldwell and her group, Witness, train people around the world to use video cameras to document human rights abuses. The resulting videos have drawn public attention to issues like child soldiers and the treatment of the mentally ill. Now Ms. Caldwell aims to create a sort of YouTube for human rights video clips.

Social entrepreneurs like Ms. Caldwell resemble traditional do-gooders in their yearning to make the world a better place, but sound like chief executives when they talk about metrics to assess cost-effectiveness. Many also generate income to finance expansion.

“We’re totally self-sustaining,” said Mirai Chatterjee, a dynamo who is coordinator of the Self-Employed Women’s Association in India. “From Day 1 our idea was to run a strong economic organization.” Ms. Chatterjee’s organization now has nearly 1 million members, owns a bank, runs 100 day care centers, trains midwives and provides health insurance for 200,000 women. It is empowering women and fighting poverty across a growing swath of rural India, and its down-to-earth approach is characteristic of social entrepreneurs.

“Politics is failing to solve all the big issues,” said Jim Wallis, who wrote “God’s Politics” and runs Sojourners, which pushes social justice issues. “So when that happens, social movements rise up.”

Muhammad Yunus, who won the Nobel Peace Prize last year, demonstrated with Grameen Bank the power of microfinancing. His bank has helped raise incomes, secure property rights for women, lower population growth and raise education standards across Bangladesh — and now the success is rippling around the globe.

One of those inspired by Mr. Yunus, for example, was Roshaneh Zafar, a young Pakistani economist. She quit her job and started Kashf, a microfinance institution that now gives hundreds of thousands of Pakistani women a route out of poverty.

“The key with social entrepreneurs is their pragmatic approach,” said Pamela Hartigan of the Schwab Foundation for Social Entrepreneurship, which is affiliated with the World Economic Forum. “They’re not out there with protest banners; they’re actually developing concrete solutions.”

When I travel around the world, I’m blown away by how these people are transforming lives. A growing number of the best and brightest university graduates in the U.S. and abroad are moving into this area (many clutching the book “How to Change the World,” a bible in the field).

It’s one of the most hopeful and helpful trends around. These folks aren’t famous, and they didn’t fly to Davos in first-class cabins or private jets, but they are showing that what it really takes to change the world isn’t so much wealth or power as creativity, determination and passion.

To comment on this column, and to post a link to your favorite social entrepreneur, go to www.nytimes.com/ontheground. Last week, the was an outpouring of reader responses to Mr. Kristof's column from Jan. 23 about classical analogies to the situation in Iraq. He's chosen his favorites and all the responses have been cataloged in "On the Ground."