Attended a big PennFuture conference today on climate change science and policy. Of course it's sobering - even terrifying - but every time the speakers mentioned "the Obama administration" or "President-Elect Obama" I had to restrain myself from jumping up and doing a little jig. Maybe we'll get used to it, but not yet! The biggest take-away from the conference was the likelihood that Obama will by executive order set things in place for the EPA to REGULATE carbon emissions, in keeping with Massachusetts v. the EPA. The supremes upheld Massachusetts' position that greenhouse gases come under the jurisdiction of the EPA, but for some strange reason the Bush Administratioon [yay! won't be writing that much longer!] has been foot-dragging on this one. By executive order, the carbon limits will be set in motion, hopefully soon to be followed by Congress. We will need to keep the pressure up, according to today's speakers. 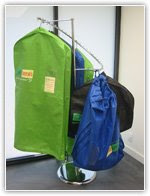 Another surprise take-away was a complimentary reusable bag to schlepp and retrieve drycleaning in, quite nicely designed, the Green Garmento - not a salad garnish, but a full-sized garment bag made of the material now commonly used for grocery totes. They suggest you keep two - one to leave at the drycleaners and one to keep at home. I plan to pass mine along to someone who actually goes to the drycleaner often enough to get some use out of it. Smart idea, hope it takes off. They cost $10 or so a piece, but compared to the cost of drycleaning, that's a small investment. You can even get a free one from their website by recommending them to your dry cleaner.

Posted by Betsy Teutsch at 7:37 PM