Costco and UPS Team Up to offer Electronics Recycling 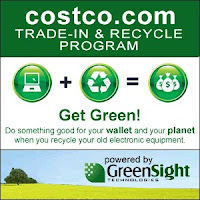 Since I've canceled most catalogs, I now actually read some of the corporate glossies which arrive here. Whether they're from an insurance company, accounting firm, or a health provider, you can guess they're going to have an article on environmental issues - at long last, people are paying attention. Gas at $4 a gallon, oil at $140 a barrel, heat waves + tornadoes + earthquakes all seem to be combining to get mass media attention.
I was pretty amazed to read in the UPS glossy that Costco has an electronics recycling program where UPS will pick up your old computers (and other items like cameras, faxes, & IPods) for free. Costco foots the bill. You input the information about your product and it tells you if there is trade-in value. If so, you get Costco credit. If not, your items are recycled at no cost to you.
It seemed a little too good to be true, so I dug a little. Why would Costco pay the shipping for products for which it gets no value? The Costco spokesperson for the program, Lani Lock, told me a typical trade-in is a relatively new laptop, at $30-$50. Costco of course gets the float on your Costco credit until you spend it. Most items have no trade-in value, though, and her explanation is that Costco is looking to upgrade its sustainability, especially in light of its big box store's rather gargantuan eco-foot prints. This program offers value to its members. Probably UPS gives them volume discounts. It creates a lot of good will - for example, I am devoting a blogpost to singing Costco's praises. So maybe it comes out of their advertising/PR budget, in part.
I also spoke to the recycler, GreenSight. Their policies sound very well-monitored. They do not off-shore their collected items; they do downstream recycling (deconstructing the electronics) in their warehouse in Florida and sell the components as replacement parts as well as raw materials. Green jobs! Marc Gunther reports that BestBuy is instituting a similar program.
Full disclosure: I own stock in both UPS and Costco. (I guess UPS makes money on this deal and Costco loses it.) I think both of them are great companies which have been paying attention to environmental issues for quite some time. So if you're a Costco member and have a lot of electronic detritus cluttering up your house, here's the answer.
By the way - I've been blogging less because I have an exciting new part-time gig. I am Director of Special Projects at GreenMicrofinance. Talk about a dream job!

Posted by Betsy Teutsch at 4:19 PM

UPS doesn't necessarily make money. My bet is that both UPS and Costco share the cost and both tout it as their green program.

Being European I don´t know about Costco - but espcecially "High-tech" things as computers, cameras etc. do have a lot of interesting materials in them (e.g. a little gold and other valuable raw-materials) that can get profitable when sold. And there´s also the components that people want. So I would think that both Costco and UPS will actually earn from this project. But then again - who said it is bad to earn money with recycling if they also choose to use parts that still can be sold intact.