The Greenest Ballpark in the World: Washington Nationals, but What 's to Eat? 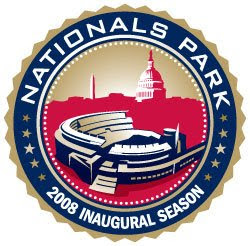 Last night we surprised my son by showing up at his 25th birthday get-together, attending the Phillies-Nationals ballgame at the Nationals' beautiful new stadium. The Phillies won big-time, so Happy Birthday Zach! It's awesome to see the Capitol in the cityscape from the park, and they shoot of fireworks when you get to "the rockets' red glare", and even "bombs bursting in air" in the Star Spangled Banner. (I think they should substitute a release of peace doves for the bombs bursting in air, but it's a nice feeling place all around.)
The stadium has impressively green kudos which are touted all over the stadium - urban infill, reusing a brownfield, superb metro connections and obscenely expensive parking, to discourage car use, and an emphasis on materials from a 500-radius used in its construction, including salvaged content. Yes, it has recycling bins, a big improvement over other most public places I visit.
The food concessions present a different picture, less green by far, perhaps since they're subcontracted. But amazingly, the plastics are by Greenware, composed of biodegradable material and therefore compostable. Though there was no evidence of actual composting, it's still great that they're not sourced from petroleum like conventional plastic. What I found a bit of a cognitive dissonance was the lack of anything fresh. It's true that people don't expect or even want ballgame food to be healthy, but I was hoping for a veggie hotdog. It would match the green cred of the stadium. Non-meat eaters can find fried fish. Vegetarians can go with pizza or nachos.Vegans will need to stick to fries, pretzels, or the kosher garlic potato knish at the Kosher kiosk on Level 4.
Good luck sneaking in a piece of fruit! And of course, no tap water allowed....

Posted by Betsy Teutsch at 9:10 AM

Too bad US and DC taxpayers were forced to pay $611 million for this stadium. The city has failing schools with leaky roofs, deadly homicide and crime rates, and yet they give billionaires toys.

What a sad array of food options for a place where we watch elite athletes at the top of their game. Now there's cognitive dissonance. Geez.

marylandterps: The city says DC businesses paid $150 million too much for Nationals Park. Instead of giving the money back or paying down the debt, the city is giving the money to another rich team owner to build a soccer stadium.

"the city is giving the money to another rich team owner to build a soccer stadium."

This is not entirely true. DC might pay for infrastructure, but the United owners appear willing to put up some SUBSTANTIAL funds (in excess of the city's $150m) to build the actual stadium.

I believe that the stadium is being paid for by a tax on city businesses and with the sale of bonds to cover the city's end of the expense, so the funds aren't coming out of the general budget to cover these costs.

The food at the stadium has been much better than at RFK. The only thing I miss is Dominic's Italian Sausages.

marylandterps - none of that money came from taxpayers, it's from bonds and taxes on big businesses. Should the team have paid for it? Yes, but don't confuse the issue - the stadium isn't taking money away from schools.

Andrew - The tax hits any business with gross receipts over $3 million per year. These are not all "big business". It affects all kinds of restaurants, bars, clubs, and retailers. And since when are businesses not taxpayers?

It's basic economics. When you increase taxes on businesses, you get less economic activity and higher prices. This affects everyone in D.C.

Most importantly, it's an issue of fairness. Why should a movie theater or a restaurant be forced to subsidize a baseball stadium which is competing with them for entertainment dollars?