What Would You Do? Common Sense vs. Right 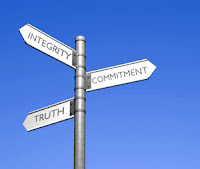 Typically I only stick with a credit card for a few years - it seems that whatever attracted me to it usually gets degraded over time, so that the perks are worth less and less. So using up the degraded perks before closing the card is a game I play. A card I stuck with because of it was free and offered hotel rooms was a good deal for us. We stayed in many nice hotels for 30,000 points a night; they awarded 3 points per dollar spent. Then of course the fine-print letter came - no more hotel rooms.
Around that time we planned a trip to a resort destination, and I naturally checked them out to book a room. I was told the 30,000 point rooms were taken, but they had 60,000 point rooms available. At that point I just wanted to use the points up, so we went with it. We had enough points for 2 nights and figured we'd just pay for the third. Great trip, by the way. I called a few times to see if any 30,000 reservations had opened up, but eventually they told me there was no such option, and an earlier agent had misinformed me. Bummer, but what can you do.
I gave them my credit card when we checked in. When the time came to check out, I had a $17 bill for some food, and was informed there was no additional bill. Hmmmmm. It seemed like we owed for one night, but I figured perhaps we had gotten the 30,000 point rate after all, which seemed lucky, but fair and plausible. I checked in with an ethics professor, namely my husband. His shrugged and responded, "No point in arguing with a computer." Clearly the clerks wouldn't have had any idea how to actually charge me if the account said we didn't owe anything for the rooms, and it seemed odd to spend a lot of time and hassle for the privilege of paying money they didn't say we owed. (I once called to explain to Citibank that they had inadvertently credited me with $100; each time I called to tell them this they actually credited me, rather than debited, me yielding $300 before I gave up.)
When the next bill came, to my surprise, no points were deducted at all. I spent all the points in the account on some merchandise and called it a day.
What would you have done? This didn't feel right, but if it had truly felt wrong, I would never have done it.

Posted by Betsy Teutsch at 8:41 PM

Well, I think you did the right thing even though you didn't feel right..You intention wasn't to defraud them..so sleep well..