Give Until It Feels Good 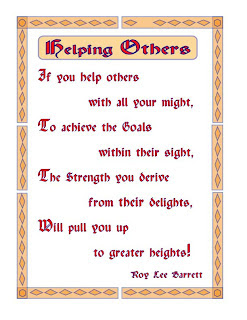 A recent study headed by psychologist Elizabeth Dunn at the University of British Columbia has confirmed what the little ditty posted here proclaims: that helping others makes you feel good. This reciprocity might seem paradoxical or even-wrongheaded. Aren't you supposed to help others to BE good, not to FEEL good?
One of the studies tested college students in British Columbia. They sere provided with modest sums of money; half were instructed to spend it on themselves and the other half were told to spend it on others. Compared to their baseline self-reported happiness, those who gave their money to others were happier afterwards than those who spent it on themselves. Other studies confirmed a correlation, though not necessarily a causation, between giving and happiness. Another study polled personal spending, and those who spent more on others reported being happier than those who spent less in a "pro-social" ways. A third study examined executives' spending of bonuses. Those who spent more on others also reported higher levels of happiness.
Dunn was surprised to learn that even spending small amounts on others yielded happiness dividends. The gifting to others was open-ended, not defined by donating to causes or as personal gift-giving. To me these seem like very different experiences. One theory is that our brains are formatted to be stimulated by giving, since we evolved as an interdependent species. Regular giving cements our bonds.
It certainly does challenge the conventional notion that spending money on ourselves will make us happy. Personally, I can attest to getting a huge rush from giving spontaneous gifts. Picking gifts for pre-set occasions is much less fun, and borderline stressful, IMHO. When my children were younger, I often noted when I had a rare day-out shopping expedition that it was more fun to shop for them than for myself, partly, perhaps, because they were less fussy; finding things that met my own criteria was much more challenging and frustrating. My husband and I have grown fond of picking up the bill for dinners with peer-friends with whom we're celebrating something special - since they don't expect to be treated (and don't need to be), it is sweet and fun. We tithe, so are frequent donaters; I feel proud when I can be generous, but much of that giving is fairly mechanical: paying pledges, sending off memorial contributions, responding to friend's requests.... I cannot report lots of dopamine release going on there.
All of this is self-reported happiness. I look forward to more research in this fascinating arena. What is your experience? Do you get happy when you do for others?

Absolutely! Giving is important - even if it not in a material manner. A smile or kind gesture can bring just as much joy to both the giver and receiver as a material gift or money.