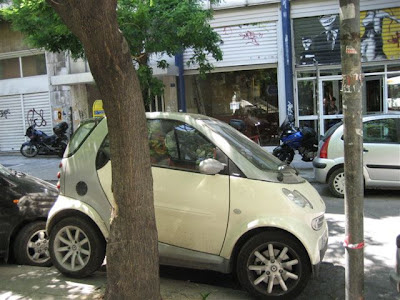 One of my favorite activities in Athens was SmartCar hunting. They were stashed in the most remarkable places, and appear in a rainbow of colors and designs. I learned from our driver that the name is an anacronym of Swatch Mercedes Art, since Swatch originally designed them, and Mercedes now manufactures them. They make a huge amount of sense. If you look around a highway, the vast majority of cars, no matter what size, are driven solo. Most of the precious, finite, polluting, war-instigating fossil fuel is used to transport the 2000 or so pounds of car, not the 150 pound driver. These cars are 2-seaters, with a little space in back.

The problem is that they aren't that fuel efficient. A Prius, a much larger car, gets better city mileage. According to Consumer Reports, they have a lot of other negatives, as well. So I'm hoping that a comparably cute, teensy vehicle comes on the market soon. I think there will be great demand for them. If the price stays down, I think people will purchase them as third cars - keeping the expensive-to-run SUV in the garage for special occasions. That is already happening with Priuses.
SmartCars are coming to the US, available in 2008. The so-called Smart Tour is underway, having just launched in California. It will be interesting to see if we super-sized Americans take to them. I spotted another curious vehicle in Athens, a three-wheeler motorcycle with a canopy. Somehow, I don't think this will take off in the States, but I have a hunch SmartCars will do pretty well. 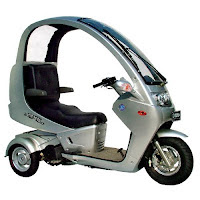 Yep, they're coming. I just took a test drive over memorial weekend. I even started a blog over it.

Cool! What did you think? Will Americans go for them? What appeals to you about them not that you've test driven one?

We saw one parked in front of a restaurant in Hollywood yesterday.

Did you mean this motorcycle is a three-seater, or a three-wheeler? Looks like the latter. I doubt it would appeal to a wild teenage child with a life-long yen for a motorcycle, unfortunately.
-jh

Good catch! It's a 3-wheeler, not a 3-seater. No, doesn't look like a Hells Angel would like it much.

These are very expensive for a 2-seater.