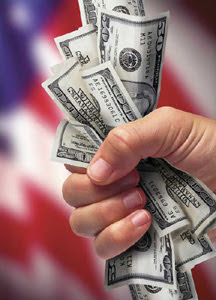 Philadelphia's recent mayoral primary had a surprising result: Tom Knox, despite pouring in ten million of his personal fortune, come in second, losing to wonky, well-spoken, button-down Michael Nutter. I voted for Nutter absentee before leaving for a few weeks, thinking it was symbolic, and lo and behold, by the time we returned, he had shot ahead and ultimately won decisively. (The primary is more or less the election in Philly, since it's 90% Democratic.)
Knox's pitch that as a successful business person he could manage Philadelphia and make it work appealed to me for a few seconds, based on the NYC Bloomberg model. After hearing his stump speech, I concluded it was way too big of a gamble. Philadelphia has enacted campaign financing limits. But for some reason which I do not understand (perhaps someone can explain it), self-financing knows no limits! (By the way, most self-funded candidates lose.) Knox flooded the airways with ads and not surprisingly, since he was outspending the the other 4 candidates many times over, took an early lead. One of his campaign signatures was very heartwarming. Citizens got robo-calls inviting them to his public FREE DINNERS all over the city. His campaign workers shopped at BJ's and cooked up spaghetti and meatballs for up to 500 attendees a time. I'm sure folks that had never participated in any politicking showed up, had a good time, and learned something.
What intrigues me most is Knox's postmortem interview where he muses about the fact that dropping $10,000,000 on a quixotic quest for office will have no adverse affect on his life, and he had a good time.

While not ruling out another run for office, Knox said he might try investment banking. "You could probably make tens of millions of dollars if you get into it and do it right," he said yesterday in an interview. "Hundreds of millions, actually."

Not that Knox needs it, even after spending $10 million on his campaign. "When you already have hundreds of millions, it doesn't matter," he said. "I can't spend it."

Clearly he is seeking meaning. Having that fortune doesn't provide it. Good for him that he is at least trying to do something meaningful. I'm sure it's frustrating having more money than you know what to do with, wanting to have a positive impact, and being clueless about what you might accomplish. The skills involved in accumulating capital are entirely different than the skills involved in using your fortune for something which is beneficial for the world.
Here's my suggestion for Knox. He should keep the spaghetti and meatball dinner thing going, all over the city, feeding people and creating more social capital. He could do it in all our public schools, and by growing more civic engagement perhaps he could bring down the homicide rate. Go, Tom!

Labels: happiness/wealth, social capital, What is money for?

I agree with much of what you are saying about Tom Knox. He clearly is looking for "meaning" in his life and will hopefully spend much more of what seems like an endless bank account to work to alleviate serious problems in Philadelphia.

I see a parallel to Tom Knox with another person. He is a native of Israel who emigrated there from the former Soviet Union in the early 1990's. Arkadi Gaydamov has amassed a fortune in the millions of dollars. It appears that there is a possibility that a good part of this fortune was obtained through somewhat questionable activities. However in the past year he has spent almost a million dollars of his own funds to set up tent cities for Israelis that have been the victims of rocket attacks in the northern part of Israel last summer and currently in the cities of Sderot and Ashkelon near the Gaza Strip. He is looked upon with great admiration by many who see him as someone who really makes a difference. However many government officials look on him as a trouble-maker and someone who won't follow the rules. He, like Tom Knox, and many famous robber barons of the late nineteenth century, like John D. Rockefeller and Andrew Carnegie, want to leave a positive legacy behind them after accumulating fortunes that were not always honorably obtained. Now Mr.Gaydamov wants to run for Mayor of Jerusalem. As Betsy states that it would be better for Mr. Knox if he continued to spend his fortune trying to strive to lower the large murder rate in Philadelphia, I want Mr. Gaydamov to continue to use his large fortune assist his fellow Israelis as they struggle to rebuild their lives and homes. My opinion is that the political arena is no place for these people. It is the rare exception like Michael Bloomberg who has managed to achieve success there. This blog is called Money Changes Things. I believe it does and can do so for the betterment of all. For those like Knox and Gaydamov that have a great deal of it, I hope they can focus on that and not have to play the political compromising games they must always play if they enter the political arena.