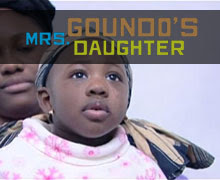 Mrs. Goundo, a young immigrant to the United States from Mali in West Africa, is faced with a heart-wrenching dilemma: she is terribly homesick for her family and country, but if she brings her little daughter to visit, her family - against Mrs. Gounda's wishes - will snatch her and take her to a female genital exciser. Ritual cutting is illegal in many countries, but far from eradicated, since it is deeply ingrained in local social systems and religious beliefs. Beliefs and myths aside, it causes profound health problems for girls and women, including infections, urine leaking, bleeding to death, pain, and major complications (including higher death rates) in childbirth.
Mrs. Goundo, having lived in the United States for a few years, has learned how dangerous and traumatic this practice is; she also sees that "uncut" women are not evil or loose, as she was taught in her tribal culture. Determined to protect her daughter from it, she must apply for asylum to stay in the United States. The movie makers document this long, tense process, contrasting it with scenes from Mali. The footage includes conversations both with Malian health activists working to eradicate this practice and those who perform it and consider it essential. The Exciser, who brags about cutting 62 little girls in one session, is not a lady you'll quickly forget....
The contrast of the Philadelphia scenes - dreary winter streets, antiseptic offices, nearly empty playgrounds and restaurants - with the lively, colorful Malian street scenes is marked. Mrs. Goundo herself dresses in a black full-body robe while the ladies in Mali dress in a wild, bold, dizzying array of colored patterns. Likewise the kids are playing on the streets and having a great time. Mali is one of the poorest countries on the planet, so probably the kids all being out on the mud streets is related to substandard housing and the absence of schools, but it does evoke the warmth and comfort of life lived in extended, traditional families in a warm climate. The filmakers have captured great beauty in their scenes of Mali, a good balance for a movie which critiques this specific cultural practice.
My two take-aways:

Do see this movie. It will be on NPR, and also part of the Human Rights Watch Traveling International Film Festival.
Hats off to Janet Goldwater and Barbara Attie, the filmakers. For more information on the work being done to eliminate female genital cutting, check out their site.

Posted by Betsy Teutsch at 9:24 PM