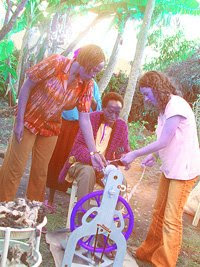 I love to highlight inspiring projects, especially those sparklers among us privileged Americans - people who just see a huge need and decide to do something to make a difference. Like LIlly Glarion, of Boulder, Colorado, who is building on her extraordinary Bat Mitzvah project. Here, in her own words, as reported in Reform Judaism Magazine:

Becoming a bat mitzvah meant I was going to become an adult in my community. Like everyone else, I would practice my Hebrew prayers, prepare a d’var torah, and do a mitzvah project. At first I thought I’d collect canned food for a homeless shelter or do volunteer work—something simple. But when my mom told me about a small group of women in Kenya who wanted to learn how to spin wool and weave cloth to support their families, I decided that a project in Africa was as good as any.

In my mind I said, “Whatever.” I didn’t have clue about what I was getting myself into.

Lilly raised money and in time, the idea that was hatched when her mom sent next to a Kenyan woman on an airplane, became a reality. Spinning adds value to the wool produced near their village, providing employment and greater incomes. When women's earnings increase, they invest it in improved nutrition and schooling for their children, the best bang for your charity buck around. She doesn't describe this as microfinance, because they're giving rather than loaning the machinery, but the ends - self-sufficient livelihood - is identical. Lilly's funds paid for a loom, spinning wheel, and spinning training sessions, setting the women up with a small enterprise to launch their entrepreneurial spirits. I love that they trained a few of the women who in turn teach the others. I also love that this project is a collaboration between Lilly and her mom Susan. What better mother-daughter project can you imagine than making the world a better place by helping third world mothers improve their lives and their children's as well?

Click here for information on how to donate to this really special project. Their fiscal sponsor, International Peace Initiatives, accepts Paypal or credit cards, if you prefer donating electronically. Susan Dexter of IPI says to just earmark your PayPal donation for Lilly's Wool Project in Kenya. To confirm by email, her address is nomadsusie@frontiernet.net.