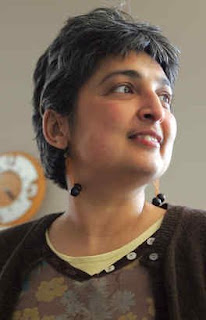 My dear friend Meenal would think it soooo lame that living a high quality, intentionally sustainable life is actually NEWS in our United States. Imagine actually mustering the impulse control to not consume whatever you want. However, she graciously consented to being featured in the Inqy's Earth Day coverage, and she is indeed an inspiration. Here's the story. Enjoy!

Once Meenal Raval decided she had to reduce her impact on the planet, the hard work began.

Raval, who started Mount Airy Greening Net, even devised a simplified calculation, patterned after a federal EZ tax form, that can be used to figure yearly CO2 emissions.

The first year, based on consumption for 12 months starting in summer 2005, the household emitted 11.6 metric tons - a low starting point compared with the U.S. household average of 20 metric tons.

The couple had already downsized to one car, and now the 15 m.p.g. minivan was traded for a 30 m.p.g. Honda Fit. Raval changed lightbulbs to compact fluorescents, installed a programmable thermostat, gave up the clothes dryer, and got a solar water heater in place of the gas one. The household footprint shrank to 8.8 metric tons.

About two years ago, Raval signed on for wind-generated electricity, a renewable source that eliminates any CO2 emissions for electrical power. The footprint got smaller.

That same year, she was considering another trip to India, where she was born and owns property. "That street called to me," she said of her hometown in Gujarat. But the 15,000-mile flight from Philadelphia to Mumbai would generate 6,600 pounds of CO2, wiping out much of the gains she had made that year.

She could have bought rainforest in South America to offset her emissions, but "didn't feel right about paying my way to do whatever the hell I wanted."

These days, the household footprint has dropped to 6.5 metric tons - about 3.3 tons per person, a sustainable level, according to John Byrne, director of the Center for Energy and Environmental Policy at the University of Delaware.

Raval emphasizes that even though she turns down the thermostat while at work or takes her own reusable plate and glass to neighborhood picnics, she doesn't deprive herself. "It's not about being uncomfortable. It's about not being wasteful."

Thank you for modleing for all of us.
Lynda

I think unwarranted travel could be put-off..but travel when necessary is just necessary and if you really just care about reducing footprint,then you ought live like a hermit.

I read, but I don't know if it is true and perhaps you guys know better, that becoming vegetarian reduces your carbon footprint significantly because the modern production of meat is so inefficient.