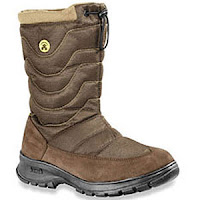 News flash: Just heard from Kamik Boots with the offer of a replacement pair. Will update!
* New boots are on their way from Kamik directly.
* Peter Glenn has also offered a $25. credit, even though none of this was their fault - go PG!
* Kamik hasn't explained why their American office directly contradicts company policy in terms of standing by the product....
* Boots arrived. Moral of the story: if you're not treated well, escalate. Getting in touch with a company's PR people, as opposed to the actual Customer Service team, seems to be a good idea, especially if you have a blog :-)

It's snowy in Connecticut where my daughter goes to college, so we encouraged her to buy good boots. She bought a pair of Kamiks online through Peter Glenn. She loved the boots. But when she wore them the second winter, they had sprung a leak, so much for the waterproof boot thing. Also the insides had worn out so much in the first season that by the second season, they dug into her heels. These were not from Payless. They should hold up!
Once my son asked Shoe Store Guy, when we went to buy new sneakers, what to do about the fraying lining of his Timberlands which he hadn't even purchased at that store? SSG had a look and said, "Timberlands shouldn't do that!" He went to the stock area and came back with a replacement pair, no charge. That's what a good company does.
When I complained to Kamik, their response was to pass the buck to the retailer. Peter Glenn was as helpful as they could be, but then reported back that Kamik wouldn't do a thing because the boots' "warranty" was out - as in, they were more than one season old. Wouldn't you think boots ought to last more than a year?
Here is my letter to Kamik. Any bets on whether they'll respond?

I recently had a very unsatisfactory experience. My daughters' beloved Kamik boots sprang a leak. When I talked to Kamik customer service, they passed the buck on to the retailer. I sent the boots back to the store, who then informed me Kamik refused to provide a replacement or refund, because the boot's were "out of warranty" , past their 1 year warranty. What kind of manufacturer of durable boots tells the customer they're only good for a year?!

I am shocked that your company doesn't stand by your product and provide a replacement. In the past when, for example, a Timberland product wore poorly, they replaced them. Likewise with Nike.
Instead, I received a run-around and Kamik passed the buck on to the retailer, who reported that Kamik "can't do anything, because the boots were purchased in 2007, and the warranty is up". Very sad and of course infuriating, given this from your website:

At Kamik®, we make footwear that brings to life our northern origins. Singular. Strong. Simply dependable. We've been doing it for over 100 years. Day after day. 24/7. The result of all this effort: a complete line of outdoor footwear built to deliver superior comfort and reliable protection in the most extreme conditions. We know you wouldn't have it any other way.

I would like to hear directly from your CEO. I am posting my experience on my well-read blog. If Kamik would like to make good on replacing these boots, I will be happy to amend my post.
In the meantime, know that customers who are treated like this get angry. Your name is your real product, and when you damage it, it's hard to fix.

Posted by Betsy Teutsch at 5:12 PM

I am a customer in Germany. My son's Kamiks also lasted only a year. I filled out the form on Kamik's corporate site here in Germany - NO RESPONSE! Let's all make a fuzz about their treatment of their customers and they will find out the hard way what allienating customers really means.

Kamik - if someone should be smart enough to read this: please reply to sonntagskind20@gmail.com

We also are disappointed first time customers of Kamik. We bought a pair each for our 3 children last Spring at the clearance sales. We expected the boots to last at least one season, with enough life left to pass them on to others who could use them.

No such luck! The cheap department store boots we have bought in the past lasted 2 seasons, but these Kamiks are worn out after only a couple of months! Unbelievable! Holes, worn out waterproofing! I am contacting Kamik directly, but buyers be warned - Kamik boots are not what they are reputed to be!

Hi, I was researching for new snow boots for a week now and became aware of a blog that details customers experience with the US head office in NH. Just until now I was going to buy a pair of boots for myself as my other work boots which I had for the last 8 years are done.

Anyways, http://moneychangesthings.blogspot.com/2009/03/kamik-boots-built-to-last-one-year.html, this mentioned blog answers the question as to why I am thinking otherwise to not purchase your brand. Can you assure me if anything happens to boots I may purchase from Kamik will last more than 1 year and say less than 5 years. If not, would you either refund or replace it for free?

I will keep you all posted!

It is, and always has been Kamik's policy to replace defective product as we stand behind our footwear. Our normal process is that if a consumer has a pair of footwear that is defective, their first course of action is to return it to the retailer where it was purchased, who in turn contacts us. Unfortunately, Kamik has no control over a retailer's return practices. If there are any issues between the consumer and the retailer, then we encourage the consumer to contact Kamik directly, via our website, so that we may rectify the matter.

With regards to bpt's blog, please be aware the first email that we received from her was on March 12, 2009, the same day she posted her blog. Once she explained what the problem was, we found the boots to be defective & replied that we would replace them.

We sent her another pair of boots. She received them and replied to us " Thank you very much. I will report on the whole resolution on my blog".

It is unfortunate that she never updated her blog.

So, all this to say, we stand behind our product and we review each case individually and if the product is found to be defective, we will replace it.

Kamik is accusing me of not including the resolution of my complaint. Duh. It's the opening salvo of my post, written in about 24 point type.

We are writing this to advise you that we misread bpt's blog and she indeed did update her blog by mentioning that Kamik offered a replacement pair of boots and that the boots arrived.

We hope this clarifies any misunderstanding and that we were incorrect in telling you that bpt's blog was never updated regarding her issue with Kamik when in fact did update her blog.

I also contacted Kamik! My brooklyn boots were great at the start of the winter season until the inside of the heel has worn out and they leak! I have to wear thick socks to keep from irritating my heel and then I get wet! I have to admit they are still warm but not usable in the snow anymore. i have not heard from the company yet. I sent them an email this week and hope they resolve this issue!

Customer services is after all such an important thing wonder when will these shoes companies learn to do so.

I owned a pair of Kamik boots for about six years, they were great. The boots are still waterproof but sadly the soles wore out. I am looking forward to buying a new pair of Kamiks as soon as today.

I have also had a bad experience with Kamik customer service. I've sent several emails about my boots that are less than a year old, and one has a giant split across the bottom. And they have not responded in any way.

I've had my Kamik boots (The exact ones they show in above) for at least 6 years, and they are still in perfect shape! And I got them used!