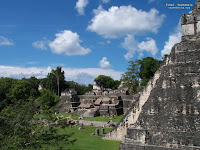 Over the winter break, my family traveled to Guatemala, a lush, beautiful country, recovering from a 35-year civil war which of course hampered its development. Guatemala's biggest sources of dollars are remittances from Guatemalan emigres (20,000 of whom have recently been deported from the US back to Guatemala, thank you President Bush) and tourism.

Mindful of what I've learned about the lack of energy infrastructure in the developing world and the impacts of energy poverty, through my work at GreenMicrofinance, I looked for things that typical travelers don't pay attention to - like electric outlets and light bulbs.

The most dramatic leg of our trip was flying north to Flores and continuing on another hour's drive to the Tikal National Park, home of the ancient Maya city of Tikal which is in the middle of a subtropical rainforest. Tourists get a double treat - a nature preserve with koatis, spider monkeys, and countless birds, along with one of the world's great archeological sites. This ancient city which once housed over 100,000 residents collapsed around 900. Its downfall is described in a chapter in Jared Diamond's Collapse. Diamond elaborates on research which suggests the city was abandoned after extensive droughts rendered its fragile agriculture unsustainable. Tikal has an elaborate water system, now excavated and working perfectly after 1200 years with just a coating of limestone to seal it, which contained an 18 month water supply. So two years of drought did it in. A contributing factor to the drought was deforestation for agriculture - a lesson to be heeded in our time.

We stayed at the lovely Jungle Lodge, one of 3 lodges in the National Park. The park is off-grid. During the day, one doesn't really notice, since they provide their own power by diesel generator. However, when we tried to order ice cream, our server shrugged and explained, "In Tikal we have no freezers." This of course is because freezers require a huge amount of energy, 24/7, something we take for granted in North America. For dinner we walked to another lodge a few hundred feet away - in total darkness. The lodges have their own electrical generators, but there are no overhead lights - just guards with flashlights. arker than any of us had ever experienced. Another reminder of how hard it is for us all to appreciate and understand how precious electric lighting is!

Posted by Betsy Teutsch at 9:52 AM