Obama In Delaware County: 9000 Fake Americans Rally in the Rain! 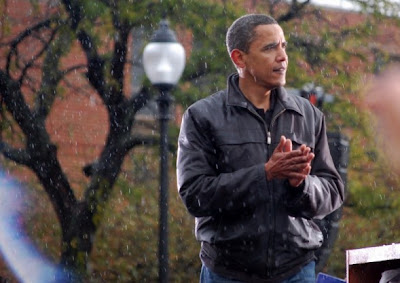 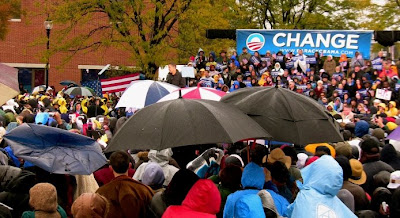 Delaware County is about 35 minutes from my house, and it looked like my last chance to be one of the millions of Americans who have personally attended an Obama rally. Though the forecast, cold and rainy, plus the anticipated crowds and the rush hour drive (the rally was called for 10:00 AM) made it a long shot for me to go. However, my son is home working for his union on GOTV, and he talked me/guilted me into going with him. It was amazing! He was right, of course. It's nice to see change happening and be a part of this historic epic campaign.
As we get to the final stretch, I am in awe. Nine thousand people - my stretch of the crowd looked very racially integrated, as well as nicely intergenerational - show up on a raining, cold late-October morning, during the work day, to rally in the SUBURBS for a Democratic presidential candidate? Chester County, long Republican dominated, has been trending to true swing-county status in recent elections. An hour away, John McCain cancelled his Quakertown rally, due to weather. Even the World Series has a rain postponement here last night! (You don't win elections by canceling rallies, though it might work to the Phillies' advantage.) Obama is gonna win Pennsylvania big. We will come through. But I do hope the weather is better next Tuesday.
Obama comes out in jeans and a short jacket, no hat, right at 10:00. He is cool, I'll tell you that. My favorite line was that 99.9% of plumbers in the United States make less than $250,000. Take that, JTP!
PS - a gentleman taking pictures next to me - with a much better camera than mine - agreed to send me some of his photos. Thanks to Mr. Kenneth Skinner. It's his photo up there. I love the prayerful pose Obama struck and Ken captured.

I was there, too. Nice to see another point of view. I wrote about my experience on http://whatgotmegoingtoday.blogspot.com/

What a great post, thanks for sharing! I went to the Obama rally in Abington a few weeks ago. The diverse crowd was so excited - it's such a great experience to be a part of.

I was at the inspirational rally as well. I really couldn't hear very much, but the diverse, dedicated crowd braving the cold, rain, wind, etc for hours was thrilling.

One minor point: The rally was held in Chester city, which is in Delaware County.