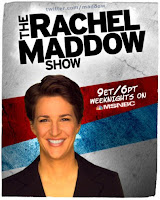 I haven't watched TV much in adult life. I am loyal to newspapers, but as the world has switched to online updates, I increasingly check news sites and blogs like the Huffington Post during the day. (It's a great procrastination device, for one.) When my kids are around we sometimes watch The Daily Show, but while I enjoy it, I don't crave it. The exception to the no-TV habit is political events. And there have been a lot of them this year, with the endless primaries and then the Democratic convention. (I think the Republicans had a convention, but I only read about it.) This is how I encountered Rachel Maddow, who was a MSNBC pundit in the primary rounds.
The blogosphere reported that she has been given her own show - which I have started to watch a few times a week. She is down-to-earth, incredibly smart, and liberal/lefty, with a heavy dose of irony, confident and comfortable in her own skin. Her presentation is commanding - she is a current affairs expert, and speaks her mind, not just some general "even-handed" crap. She manages to be strong without being strident. I just read an interview and was totally not surprised to read she is a Stanford grad and a Rhodes scholar. Hence she would be an excellent vice presidential candidate. Maybe she will follow Al Franken to electoral politics.
She's on Air America radio during the day, and her TV show is on MSNBC at 9:00 PM. I didn't even know what MSNBC was before this! (It's a cable TV channel owned by NBC.) They got me!
Curious what you all think of Rachel.

Posted by Betsy Teutsch at 6:18 PM

I, too, am not much of a TV watcher, I am not really interested in hearing the mainstream news with it's corporate, status quo, center-right spin. But I am hooked on Rachael Maddow. What a breath of fresh air. She is smart, witty, wise and not afraid to tell it like it is. She is on MSNBC at 9pm and it is rerun at 11pm. Definitely worth watching!

I agree she's terrific. I've been listing to her Air America radio show for a long time (because that's what's on the radio as I drive home from work). I was excited when she became a regular guest on Keith Olberman's Countdown on MSNBC -- and now that they've given her her own show, I routinely record the 2-hour slot that includes both of their shows Monday-Thursday of each week. (On the west coast the pair is on 3 times! 5, 8, and 11.)
An example from just today of what's great about her show: A friend from Virginia, surrounded by McCain signs, is voting for Obama and noted that "except for his steady support for veterans, he's got nothing to recommend him at this point," or words to that effect. Support for vets?? I was able to quickly link her to the DAV guy who made the case against McCain fabulously last night on Rachel Maddow's show. It should be its own campaign ad; very persusasive! The myth of the war hero who loves and supports vets, thoroughly debunked: www.msnbc.msn.com/id/21134540/vp/26910303#26910303 (click the link "war vets grade debate").