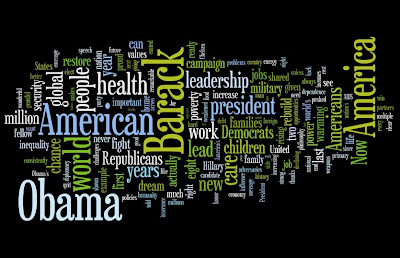 Here's an image, called a world cloud, of Bill Clinton's speech.
Hat tip for this gorgeous graphic to Daily Kos (where I am spending entirely too much time these days... when I'm not actually WATCHING cable TV.) Geez, I wish my mother (1919-1994) was around. She would have been as thrilled by Hillary and Barack as she would have been repelled by the wingnuts. Accusing the Democratic candidate of being Ivy League and talented! Talk about an indictment!!
Check out this cool site where you can create your own word clouds.

Posted by Betsy Teutsch at 4:14 PM